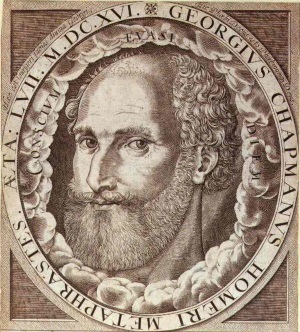 Very little is known about George Chapman’s early life apart from the fact that he was born in Hitchin, Hertfordshire, in 1559. Based on his level of classical scholarship, he probably attended Oxford University around the mid-1570s although there is no record of him having graduated. It is known that between 1583 and 1585 he worked in the household of Sir Ralph Sadler, a wealthy and prominent Hertfordshire baronet who was at one time secretary to Thomas Cromwell and served four Tudor monarchs during his career. In the early 1590s he fought in the Netherlands under the English general Sir Francis Vere.

Chapman published two poems The Shadow of Night and Two Poeticall Hymns in 1594 and the following year Ovid’s Banquet of Sence. Towards the end of the 16th Century he turned to writing plays, in all seven comedies and four tragedies, the latter all on French themes, whose mocking content apparently upset the French ambassador. He also collaborated with Ben Jonson and Jon Marston on a play Eastward Ho, poking fun at King James’s Scottish courtiers, which landed all three of them in jail. He later fell out with Jonson and wrote a stinging poem An Invective by Mr George Chapman against Mr Ben Jonson. He also wrote one of the most successful masques of the Jacobean period, The Memorable Masque of the Middle Temple and Lincoln’s Inn in 1613.

In 1596 he published De Guiana, Carmen Epicum, a poem in praise of Sir Walter Raleigh’s exploits, as well as a continuation of Marlowe’s unfinished Hero and Leander. The year 1609 saw the publication of his Eurithmiæ Raptus; or The Tears of Peace, a dialogue between the poet and Lady Peace on the evils of materialism. Chapman also earned a formidable reputation as a translator of the classics and his masterful translation of Vergil’s Georgics and Homer’s Odyssey, which remained the standard English version until Pope’s over a century later. The latter inspired Keats’s 1815 poem On Looking into Chapman’s Homer. Other translations included the works of Hesiod, dedicated to Francis Bacon, and Juvenal’s Fifth Satire.

Chapman’s life, which had been troubled by poverty and debt throughout, came to an end in 1634. His religious beliefs and temperate behaviour is reflected in his poetry, much of which has a moralistic tone. He was an important figure in the English Renaissance and clearly a great scholar as well as a fine poet. A monument to him designed by Inigo Jones marks his tomb in the church of St Giles in the Field.