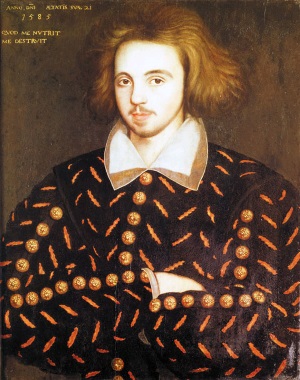 Christopher Marlowe was born in Canterbury, the son of a shoemaker, and was educated at Corpus Christi College, Cambridge, obtaining his MA in 1587.

He is believed to have been a government spy in an era of great intrigue and he led a somewhat turbulent private life which attracted accusations of atheism and homosexuality and a brief period of imprisonment. He died in a fight at a tavern in Deptford, supposedly over an argument about the bill.

He was a highly successful playwright, taking overreaching heroes as his central characters in Tamburlaine the Great, The Jew of Malta, and Dr. Faustus. His poetic reputation rests on the narrative poem Hero and Leander and The Passionate Shepherd.

The Passionate Shepherd to His Love

The Reckoning: The Murder of Christopher Marlowe
Charles Nicholl