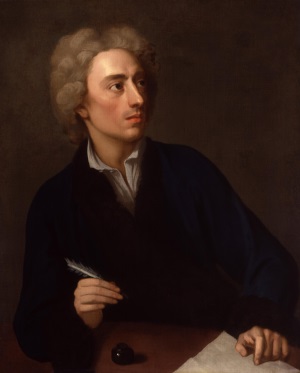 Alexander Pope was born in London, the son of a Roman Catholic linen-draper. Highly gifted academically, he learnt Latin and Greek from a local priest and later mastered French and Italian in spite of being denied a university education because of religious discrimination.

He contracted tuberculosis as a child which permanently damaged his health and posture. His Pastorals (1709) showed his precocious talent and several major poetical works followed soon after his move to London. In 1719 he moved to rural Twickenham where he became keenly interested in horticulture and landscape gardening.

His later writing is politically satirical and the combination of his wit and invective reflects a highly sophisticated but sometimes vengeful mentality.

On a certain Lady at Court

Elegy to the Memory of an Unfortunate Lady

The Dying Christian to his Soul