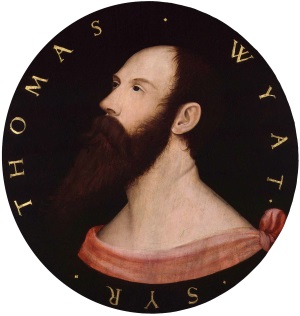 Sir Thomas Wyatt was educated at St. John's College, Cambridge and served in the court of Henry VIII, holding several senior overseas positions including that of ambassador to Charles V (1537-1539), following his knighthood in 1535. He was not always in favour at court, however, and was twice imprisoned in the Tower of London.

Together with Henry Howard, Earl of Surrey, Wyatt introduced the sonnet into English literature from Italy, providing it with its final rhyming couplet. His works, which were not published until after his death, include Certayne Psalms... drawen into English meter (1549) and a collection of poems published in Tottel's Miscellany (1557).