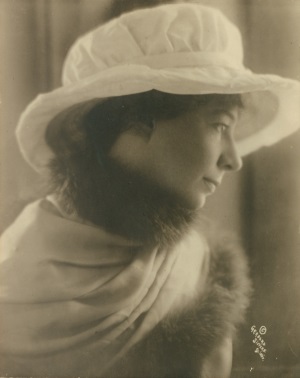 Sara Teasdale was born in St Louis, Missouri, the youngest of four children in a wealthy, religious family. She was home-schooled for the first few years of her life on account of her sickly health but from the age of ten studied at Mary Ellen Dean Lockwood’s school, then from fourteen at Mary Institute Hosmer Hall, a girls’ school in St Louis aimed at developing American women for future positions of responsibility. She wrote her first poetry there, Reedy’s Mirror, which was published in a local newspaper.

On leaving school she joined a group of young female artists who produced The Potter’s Wheel, a monthly artistic and literary magazine. Her first collection of poems, Sonnets to Duse and Other Poems, was published in 1907, her second, Helen of Troy and Other Poems in 1911, and her third, Rivers to the Sea, in 1915.

In 1914 she married Ernest Filsinger, having previously been courted by the poet Vachel Lindsey and a number of other suitors, and moved with her husband to New York City in 1916. Two years later she won the Columbia University Poetry Society Prize (later to become the Pulitzer Prize for Poetry) and the Poetry Society Prize for Love Songs, which was published in 1917. She got divorced contrary to her husband’s wishes in 1929. She suffered from ill health in the latter part of her life, which she ended by taking an overdose of sleeping pills in 1933.

In all Teasdale produced seven collections of poems, her final one, Strange Victory, being published posthumously. Her work is characterised by its simplicity, her love of beautiful things and the passionate and romantic subject matter. Many of her poems convey a certain sadness, dealing with love, desertion, and death from a woman’s viewpoint.

Advice To A Girl

From The Woolworth Tower

A Minuet Of Mozart’s

There Will Come Soft Rains