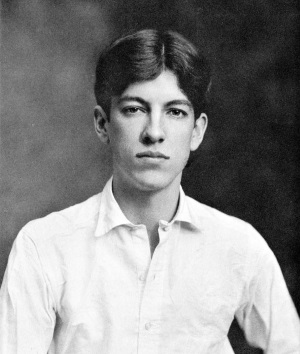 Alan Seeger was born in New York City and grew up in comfortable circumstances on Staten Island. His father was a businessman in the sugar refining industry, and his mother a composer. Seeger’s brother was a celebrated musicologist whose children were popular singers. He was educated at schools in New York and later at Harvard University where he was a contemporary of T. S. Eliot.

After leaving Harvard, contrary to his father’s wishes for him to pursue a business career, he lived in Greenwich Village to concentrate on becoming a poet. He later moved to Paris where he was living a somewhat bohemian existence when war was declared. Sympathetic to France’s cause, he joined the French foreign Legion. During his time in the army, he continued to write poetry, the theme of death becoming more prevalent as the war progressed and he witnessed the loss of colleagues. He was killed in action in 1916 during the battle of the Somme, after having been incorrectly reported killed in battle the previous year. He was posthumously awarded the Croix de Guerre and the Medaille Militaire.

A collection of his poems was published after his death, the most famous being his premonitory poem, I Have a Rendezvous with Death....

An Ode to Natural Beauty

The Torture of Cuauhtemoc

The Need to Love

With a Copy of Shakespeare's Sonnets on Leaving College

Written in a Volume of the Comtesse de Noailles

On the Cliffs, Newport

To England at the Outbreak of the Balkan War

At the Tomb of Napoleon Before the Elections in America—November, 1912

Do You Remember Once...

An Ode to Antares

On a Theme in the Greek Anthology

After an Epigram of Clement Marot

I Have a Rendezvous with Death...

A Message to America

Introduction and Conclusion of a Long Poem

Ode in Memory of the American Volunteers Fallen for France