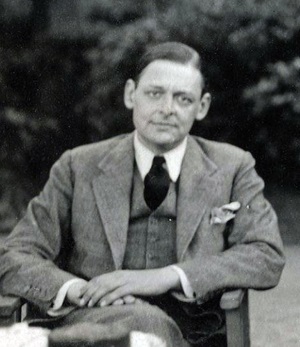 Thomas Stearns Eliot was born in St Louis, Missouri in 1888, the son of a successful businessman. He was educated at Smith Academy in St Louis and Milton Academy in Massachusetts for a year before going on to study at Harvard, graduating with an MA in English Literature. He then worked as a Philosophy assistant at Harvard for a year before moving to Paris to study Philosophy at the Sorbonne. He then returned to Harvard to study Indian Philosophy and Sanskrit for three years. In 1914 he moved to England and went to Merton College, Oxford, having had to abandon his plans to study in Germany as a result of the outbreak of World War I. He found Oxford rather dull, however, and spent a lot of his time there in London instead. He left Oxford after a year and moved to London where he worked in teaching jobs, first at Birkbeck College, London University and then at several schools. In London he was introduced to the American expatriate poet, Ezra Pound, who took him under his wing and introduced him to a number of important literary figures.

In 1917 he joined Lloyds Bank in London in the foreign accounts department and worked there until 1925, leaving to become director of publishing for Faber and Faber, where he was to spend the rest of his career, publishing, among others, the works of W. H. Auden and Ted Hughes. He became a British subject in 1927. In 1932 he took a one-year sabbatical from Faber and Faber to take a professorship at Harvard.

In 1915 T. S. Eliot married Vivienne Haigh-Wood, but the marriage never worked out, mainly because of her bouts of depression and general ill health. The couple separated in 1933 but never divorced and Vivienne was committed to a mental hospital in Stoke Newington by her brother in 1938, where she died in 1947. From 1933 to 1946 T. S. Eliot had a close romantic relationship with an American woman, Emily Hale whom he had met many years earlier. They exchanged letters until his second marriage in 1957 to his former secretary at Faber and Faber, Esme Valerie Fletcher who was almost 40 years his junior. He died in 1965 and has a plaque in Poets’ Corner, Westminster Abbey.

For a figure of his stature, T. S. Eliot’s poetic output was relatively small but includes The Love Song of J Alfred Prufrock (1915), his best known work, The Waste Land (1922), The Hollow Men (1925), Ash Wednesday (1927), Old Possum’s Book on Practical Cats (1939), on which the musical Cats is based, and Four Quartets, published between 1936 and 1942, which he regarded as his masterpiece. In 1948 he was awarded the Order of Merit and the Nobel Prize for Literature. He also wrote several plays and many critical essays. His work is erudite, complex, mystical, and philosophical. Many critics, although greatly admiring his use of language, have found its message difficult to fathom.