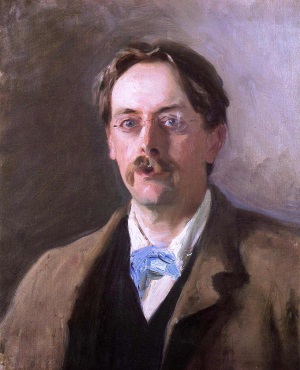 Edmund Gosse was born in London, the son of an eminent zoologist and member of the Plymouth Brethren. He was educated privately and in 1807 became an assistant librarian at the British Museum.

He was an accomplished linguist and was appointed a translator to the Board of Trade in 1875. He also lectured in English Literature at Cambridge and from 1904-1914 was librarian to the House of Lords. He was a major critic of European literature and received many distinctions, including the Legion of Honour and a knighthood in 1925.

Although primarily a critic and essayist, he also wrote poetry and his collected poems were published in 1911. His prose works include biographies of Ibsen, John Donne, Thomas Gray, Congreve, and Swinburne, as well as Father and Son, a sensitive description of his puritanical childhood.