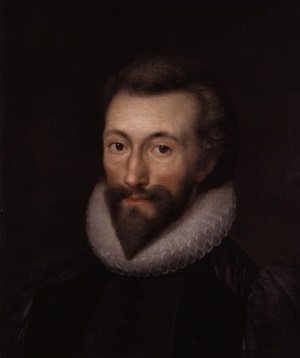 John Donne was born in London, the son of a wealthy ironmonger and the maternal grandson of the playwright John Heywood. Brought up a Catholic, he was educated at Oxford, leaving without a degree to avoid taking the Oath of Supremacy, although he later converted to the Church of England. He trained as a lawyer at Lincoln's Inn where he became notorious for his wit and high living and in 1596 sailed as a volunteer with the Earl of Essex and Raleigh on the Cadiz expedition.

Appointed on his return as chief secretary to Sir Thomas Egerton, the Keeper of the Great Seal, he was subsequently dismissed and briefly imprisoned following the discovery of his secret illicit marriage to his employer's 17-year old niece, Ann Moore, with whom he went on to have 12 children. After some impoverished and soul-searching years, he took Holy Orders in 1615, ultimately becoming Dean of St. Paul's in 1621, in which capacity he delivered many notable sermons.

His poetry, which was published primarily on love and religious themes, is characterised by its intensity, passion, intellectual argument, word-play, and cryptic complexity.

That Time and Absence proves Rather helps than hurts to loves

A Hymn to God the Father