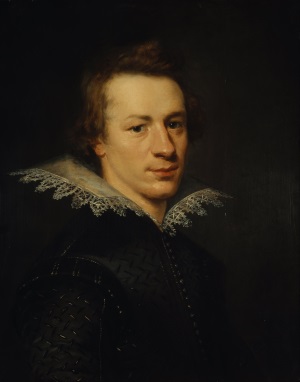 William Drummond was born at Hawthornden Castle near Edinburgh in 1585, the son of the first Laird of Hawthornden, who was one of King James I’s ushers. He was educated at the Royal High School of Edinburgh and gained an MA at Edinburgh University in 1605. He then spent two years in France studying law.

He succeeded to the title on the death of his father in 1610 and abandoned his law studies in favour of becoming a poet. In 1613 his first poem, Tears on the Death of Meliades, an elegy on the death of Henry, Prince of Wales, was published. This was followed in 1616 by Poems: Amorous, Funerall, Divine, Pastorall, in Sonnets, Songs, Sextains, Madrigals, a lament following the death the previous year of his wife to be. In 1617 he wrote Forth Feasting, a poem celebrating James I’s first visit to Scotland that year, and in 1618 he was visited by the poet Ben Jonson.

In the mid 1620’s he experimented with a number of military inventions, including a primitive machine gun, none of which appear to have been successful. After travels to the continent he settled permanently at Hawthornden and married Elizabeth Logan who bore him nine children, only one of whom outlived him. He started work on a history of Scotland and produced a number of Royalist political pamphlets before his death in 1649.

He was one of the first Scottish poets to write in English and is one of 16 poets and writers whose names appear on the Scott Monument in Edinburgh which include Lord Byron, Robert Burns, and Tobias Smollett. His most important works are The Cypresse Grove, an essay on the folly and the fear of death, and his poems, many of which are adaptations from French, Italian, and Spanish. He was a great collector of scholarly books in Latin, Greek, Hebrew, French, Italian, and English, most of which he bought in France. In 1826 he generously donated a large number of these to Edinburgh University.