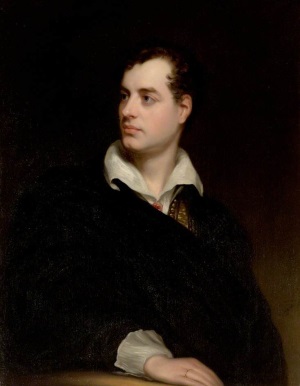 George Byron was born in London, the son of a Scottish heiress descended from James I of Scotland and Captain "Mad Jack" Byron, a profligate who died when Byron was three. In 1798 he succeeded his great-uncle to the barony at Newstead Abbey in Nottinghamshire. He was educated at Aberdeen Grammar School, then Harrow and Cambridge.

After university, he set out on the grand tour of Europe, his experiences there greatly influencing his poetic style. In 1815 he married Anne Milbanke, a mathematician, with whom he had a daughter. The marriage was short-lived, however, and they separated the following year, when Byron left England for the Continent, never to return.

There he became closely associated with Shelley and his wife and even more closely with Mary Shelley's stepsister, who bore him a daughter. He moved on to Venice where he was feted by the Italians as a revolutionary poet. In 1823 he sailed for Greece to fight in the Greek War for Indepence, dying of rheumatic fever at Missolongi.

Passionate, irreverent, and adventurous, Byron captured the romantic spirit of a revolutionary era and his death was mourned by many as much for his life as for his poetry, of which Childe Harold and Don Juan are his chief works.

When we Two parted

She walks in Beauty

The Isles of Greece