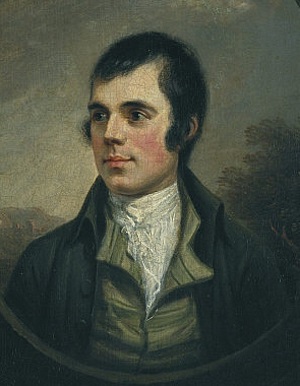 Robert Burns was born at Alloway, near Ayr, Scotland, the son of a farmer. Reared on a diet of austerity and Calvinistic rectitude, Robert received no formal education. He trained as a flax dresser initially, taking over the family farm with his brother on his father's death.

Following a number of passionate love affairs, he married Jean Armstrong who had borne him a child several years earlier and farmed near Dumfries, apparently unsuccessfully as he had to work simultaneously as an excise officer to supplement his income. In spite of having two jobs, he composed numerous songs and poems, many in Lowland Scottish vernacular which has to some extent limited his universal appeal. This is not true of his major works, however, and it is his earthly language, combined with a heartfelt blend of fun and nostalgia, which give his poetry a unique freshness and originality.

In Scotland, he is a cult figure as a rustic poet and the pride of his nation with his own celebratory night. His output during his short and hectic life was truly prolific and his works include many classic songs and poems which have become household names.

Address to a Haggis