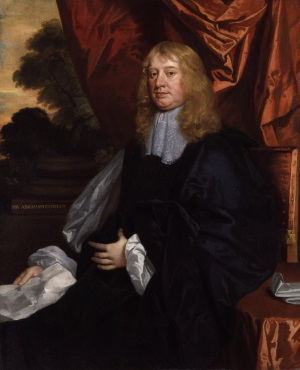 Abraham Cowley was born in London and was educated at Westminster School and Trinity College, Cambridge, where he was made a fellow in 1640. He was deprived of this during the Civil War for his Royalist sympathies and spent the next ten years in Paris as secretary to Queen Henrietta Maria.

After a brief period of imprisonment on his return to England, he studied medicine at Oxford, qualifying as a doctor in 1657. His Cambridge fellowship was reinstated after the Restoration when he was granted land by Henrietta Maria. Cowley was a precocious talent, who published two romantic epics whilst still at school. Love's Riddle, a pastoral drama, appeared in 1638 and The Cutter of Coleman Street, a comedy satirising the Puritans in 1641. The Mistress, a love cycle first published in 1647, reappeared in a multiple collection published in 1656 which also included several classical works such as the epic Davideis. A folio edition of his works was published posthumously.

Cowley enjoyed great fame during his lifetime and was buried in Westminster Abbey alongside Chaucer and Spenser but his popularity declined after his death.

On the Death of Mr. William Hervey