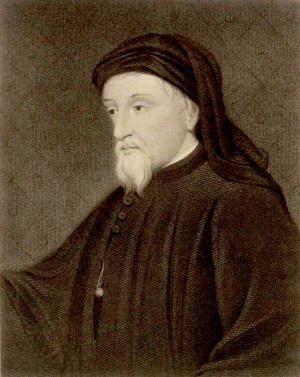 Geoffrey Chaucer was born in London, the son of a vintner. After studying law at the Inner Temple, he was employed by the Duke of Clarence as a page and served in the army in France during the Hundred Years War, when he was captured and ransomed.

He then entered the service of Edward III and held various positions at court, going on missions to Italy, France, and Flanders. He was appointed a customs officer at the port of London and in 1385 he retired to Kent where he became a Justice of the Peace and a knight of the shire.

Chaucer is indisputably the first great English poet. His early work is strongly influenced by French and Italian culture and his later masterpiece, The Canterbury Tales, has a charm, vitality, humour, and wisdom which render it highly readable six centuries later. His work is also significant as a reference point in the evolution of the English language.