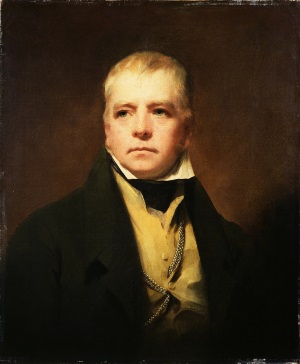 Walter Scott was born in Edinburgh in 1771 into a large family. He suffered from ill health in infancy and at the age of two he was sent to live with his grandparents on their farm in the Scottish Borders. It was here thanks to his grandparents and his aunt that he first became acquainted with the traditional ballads which would form the core of his early poetry. In 1778 he returned to Edinburgh and the following year attended the Royal High School of Edinburgh and then the grammar school in Kelso. He went on to study classics at the University of Edinburgh at the age of twelve and on leaving began an apprenticeship as a lawyer’s clerk in his father’s office. During this period he met many of the leading literary figures of the day.

After being disappointed in his first love for Williamina Belsches, a woman of high social standing, he married Charlotte Charpentier, a French woman living in England under the guardianship of Lord Downshire after becoming an orphan. They went on to have five children. In 1799 he was appointed deputy sheriff of Selkirk.

Scott’s literary career began as a translator of German ballads from which he progressed to writing Scottish Border ballads and narrative poems. He started to have his poetry published by his friend James Ballantyne in 1796 and came to public attention in 1805 for The Lay of the Last Minstrel. This was followed by Marmion in 1808, The Lady of the Lake in 1810, and The Lord of the Isles in 1815. Such was his fame that he was offered the position of Poet Laureate in 1813, which he declined, this honour subsequently going to Robert Southey.

After having achieved great success as a poet, he turned his attention to writing historical novels. His first, Waverley, was published in 1814 and over the next two decades he published many more, the best known of which are Rob Roy (1817), The Heart of Midlothian (1818), Ivanhoe (1820), Kenilworth (1821), Quenti Durward (1823), and The Fair Maid of Perth (1828). He also wrote short stories, a few plays and several works of non-fiction including a history of Scotland and a biography of Napoleon. Today the appeal of his poetry has been to some extent eclipsed by his fame as a novelist but his poems reflect his love of Scottish history, legend, and landscape.

He enjoyed phenomenal popularity during his lifetime and was knighted by King George IV in 1820. His wife predeceased him and he died in 1832. He has been commemorated in many portraits and sculptures, the most impressive being The Scott Monument in Princes Street, Edinburgh.