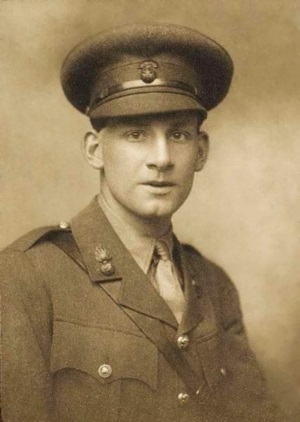 Siegfried Sassoon was born in Matfield, Kent, the son of Alfred Sassoon, a member of the vastly wealthy Pesian Jewish Sassoon merchant family. His mother, Theresa, née Thornycroft, was a Roman Catholic and Alfred was disinherited for marrying her. His parents separated when Siegfried, who was so named because of his mother’s love of Wagner’s operas, was four years old. He was educated at New Beacon School in Sevenoaks and at Marlborough College. He went on to Cambridge in 1905 to read History but left after two years without obtaining a degree. Benefitting from a modest private income, he spent the next few years hunting, playing cricket and writing poetry.

In 1914 he joined the army as an officer, coincidentally on the same day as war was declared. He did not see action until 1915, however, having broken his arm in a riding accident which rendered him unfit for service. In November 1915, the same month in which his younger brother was killed at Gallipoli, he was sent to France where he formed a close friendship with a fellow poet, Robert Graves. He distinguished himself in battle on many occasions and was awarded the military cross in 1916. As the war progressed, however, he became increasingly disillusioned with its conduct and the associated jingoism which led to him refusing to return to duty after a period of convalescence. A letter he sent to his commanding officer entitled Finished with the War: A Soldier’s Declaration was subsequently read out in Parliament and was regarded at best as unpatriotic and at worst treasonous. On the strength of this, he was sent to Craiglockhart War Hospital in Edinburgh to be treated for shell shock, having narrowly avoided a court martial. It was at Craiglockhart that he met fellow war poet Wilfred Owen, whose Anthem to Doomed Youth he had a hand in.

After the war he joined the socialist Daily Herald as its literary editor. He later went on a lecture tour of the United States. He started to branch out from poetry and in 1928 published his semi-autobiographical Memoirs of a Fox-Hunting Man, which was well received. In later years he wrote three volumes of genuine autobiography.

After having love affairs with a number of prominent men, in 1933 he married Hester Gatty, a woman 20 years his junior and in 1936 their son, George, was born. The marriage did not last however and in 1945 they separated. Siegfried Sassoon was appointed CBE in 1951 and died in 1967, aged 80.

Siegfried Sassoon is one of the sixteen Great War poets commemorated on a slate stone in Poets’ Corner in Westminster Abbey. His early war poetry reflected in poems such as Absolution is full of enthusiasm and optimism but the mood changes in his later war poetry to one of anger and disgust at the senseless loss of life and the incompetence and insensitivity of generals and politicians cynically expressed in Does It Matter?. He believed his later non-war poetry to be superior to his war poetry but it is for the latter and for his anti-war stance he is chiefly remembered.

The Poet as Hero

Suicide in the Trenches

To Any Dead Officer