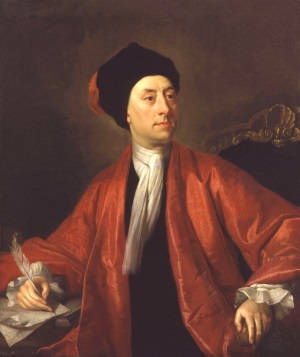 Matthew Prior was born in London, the son of a joiner originally from Dorset. He attended Westminster School from the age of eight and when his father died three years later he came under the care of his uncle, a vintner, who could not afford the fees. His academic future was rescued by Charles Sackville, the 6th Earl of Dorset, who, on hearing Matthew reading Horace to himself in his uncle’s tavern where he had been put to work, financed his continued education at Westminster. Sackville’s foresight and generosity was rewarded by Matthew being named as a King’s Scholar in 1681. He went on to take a degree at St John’s College, Cambridge, obtaining his BA in 1686 and becoming a fellow two years later.

In 1687 he collaborated with his friend from Winchester, Charles Montagu, who was also at Cambridge, in writing The City Mouse and The Country Mouse, a mixed prose and verse attack on Dryden’s The Hind and The Panther. This type of satire was to appear in many of his future works. He then worked for a time as a tutor to the sons of the Earl of Exeter whilst continuing to write poetry, before achieving his cherished ambition of obtaining a political post in 1690.

Over the next twenty-five years he held several secretarial positions as a diplomatic agent in the Netherlands and France, where with his knowledge of French and Latin he made important contributions to England’s role in various peace treaties, such as the Treaty of Ryswyk (1697) and the Treaty of Utrecht (1713). In the mid-1690s he was appointed gentleman of the King’s bedchamber, serving King William III, and held several senior positions in London. Some of his best poetry was written during this period. In his final years he also wrote Dialogues of the Dead, a series of imaginary conversations between famous men.

After Queen Anne’s accession he somewhat fell out of favour politically but continued to write poetry and contributed to the Examiner, a political newspaper. After her death and the return to power of the Whigs, he was arrested in 1715 for his part in a corruption and treason scandal and was kept in close custody for two years. During this period he wrote his longest humorous poem Alma: or, The Progress of the Mind, which along with Solomon and Poems on several Occasions was published in 1718. He died of cholera in Cambridgeshire in 1721 and is buried in Westminster Abbey, by his request at the feet of Spenser, of whom he was a great admirer.

Matthew Prior’s poetry is very diverse and includes a lot of love poetry, satirical works, eulogies, and adaptations from the classics. His poems are often humorous but demonstrate an underlying scholarly mind and considerable narrative skill. Some of his best known works are Jinny the Just, based on Jane Ansley, his first mistress and housekeeper, Hans Carvel, To a Child of Quality of Five Years Old, On the Taking of Namur by the King of Britain, Henry and Emma, and The Garland.

The Question to Lisetta

To a Child of Quality

The Lady who offers her Looking-Glass to Venus

For my own Monument

Buy books related to Matthew Prior at amazon.co.uk