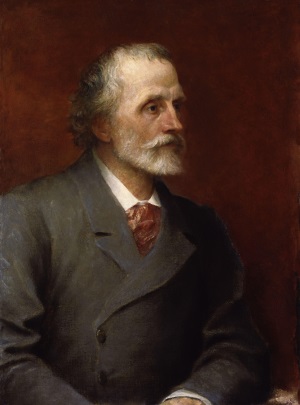 George Meredith was born in Portsmouth where his father and grandfather were naval outfitters. At the age of 14 he went to the Moravian School at Neuwied, Germany, and was afterwards articled to a London solicitor.

He soon gave this up, however, in favour of journalism and writing, working for the Ipswich Journal and as a reader for a publishing company. In 1849 he married Mary Ellen Nicholls, the widowed daughter of Thomas Love Peacock, but she left him for the painter Henry Wallis. He lodged for a time with Swinburne and Rossetti in Chelsea and following the death of his wife, he married Marie Vulliamy in 1864 and they moved to a cottage in Box Hill in Surrey, which was to become his permanent home. In 1866 he acted as a war correspondent in Italy.

His first volume of verse, Poems, dedicated to Thomas Love Peacock, was published in 1851 and his second, Modern Love (1862), established him as a successful poet. A third volume of poetry, Poems and Lyrics of the Joy of Earth appeared in 1883, followed by Poems and Ballads of Tragic Life (1884), A Reading of Life (1909), and Last Poems (1909). Meredith also wrote several novels and a number of short stories.

Love in the Valley