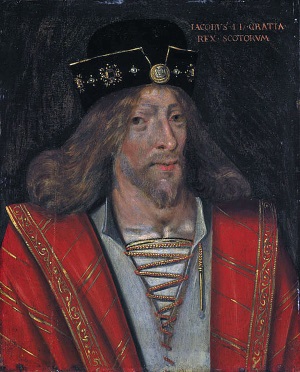 James I of Scotland, the son of Robert III of Scotland, was kidnapped whilst still a boy on his way to France and was held in England for the next 19 years.

Towards the end of this period he married Joan Beaufort, the subject of his best known poem, The Kingis Quair (The King's Book), an autobiographical work of some 200 stanzas. Other poems which have been attributed to him include The Ballad of Good Counsel and Christis Kirk on the Green.

He was assassinated at Perth and is later remembered in Dante Rossetti's poem The King's Tragedy.

Spring Song of the Birds

Buy books related to King James I of Scotland at amazon.co.uk