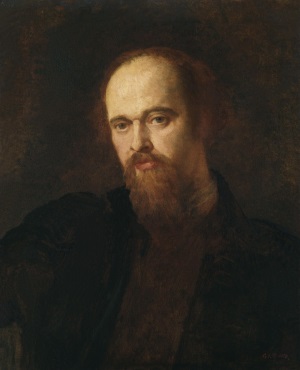 Dante Gabriel Rossetti was the son of Gabriele Rossetti, an Italian political exile who came to England in 1824, and the elder brother of the poet Christina Rossetti. He was born in London and educated at King's College School.

After studying painting at Cary's Art Academy and the Royal Academy, he became acquainted with Holman Hunt and John Everett Millais who went on to form the Pre-Raphaelite Brotherhood, a movement characterised by romanticism, symbolism, and dramatic use of colour.

Although better known as a painter, Rossetti wrote poetry from an early age, his best known poem, The Blessed Damozel, appearing in 1850 in The Gem, the Pre-Raphaelite Brotherhood's magazine.

In 1860 he married the beautiful Eleanor Siddal, the model for the drowned Ophelia in Millais' painting. Devastated by her death in 1862 from a laudanum overdose, he buried a manuscript containing many poems with her, which he later exhumed and published in 1870. His first volume of poetry, Early Italian Poems, had been published earlier in 1861 and contained translations of Dante and some 60 other poets. In 1881 he published Ballads and Sonnets, a year before his death at the age of 54. Like his painting, Rossetti's poetry is romantic, ornate, and sensuous.