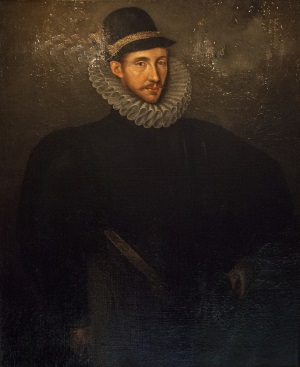 Fulke Greville was born in Alcester in Warwickshire, the only son of Sir Fulke Greville, treasurer of the Navy. He was educated at Shrewsbury School, starting on the same day as his lifelong friend, Sir Philip Sidney, whose biography he was later to write and for which he is best known. He went on to Jesus College, Cambridge but left after three years without taking a degree. He then went to work for Sir Francis Walsingham, Queen Elizabeth I’s spymaster, and travelled extensively throughout Europe on diplomatic missions between 1572 and 1575.

Intent on a career at court, he attached himself to the radical Protestant faction headed by Sidney’s uncle, Robert Dudley, Earl of Leicester, but failed to secure a significant position. He became a Clerk to the Court of the Welsh Marches in 1576 but left to become a member of the court of Queen Elizabeth I along with Sir Philip Sidney, where he became a capable administrator, enjoying periods in and out of favour.

He was elected MP for Southampton in 1581 and secretary to the principality of Wales in 1583. Although refused permission to join Robert Dudley’s army in the Netherlands, where Sir Philip Sidney was killed, he participated in the Battle of Coutans in France and served under Henry III of Navarre during the French Wars of Religion. He served as the MP for Warwickshire for various periods in the late 16th century and early 17th and was made treasurer of the navy in 1598. He was granted the derelict Warwick Castle in 1614 by James I, which he restored. In that same year he became Chancellor of the Exchequer and in 1621 was raised to the peerage as Baron Brooke. He never married, but was “a constant courtier of the ladies” and had a long, tempestuous affair with Sir Philip Sidney’s younger sister, Mary Herbert, Countess of Pembroke.

In 1628 he was stabbed in his London house by a disgruntled servant and died a month later of an infection, his wounds having been wrongly treated by his physicians with animal fat.

Greville’s poetry consists of closet tragedies (dramas more suitable for reading than production), sonnets and poems on political and moral subjects, written in a serious and moralistic style. His major verse poems include Caelica, a collection of sonnets, A Treatise of Monarchy, and A Treatise of Religion.