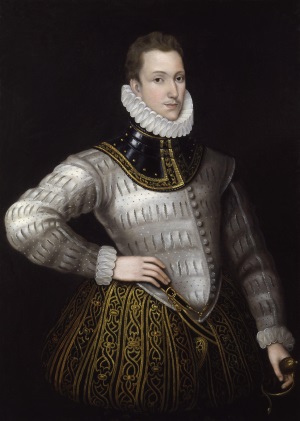 Sir Philip Sidney was born at Penshurst in Kent, the son of Sir Henry Sidney, Queen Elizabeth I's Lord Deputy of Ireland. He was educated at Shrewsbury and Christ Church, Oxford but left without taking a degree.

In 1583 he married, Frances, the daughter of Sir Francis Walsingham. Earlier, between 1572 and 1575 he had travelled to numerous Continental cities, where he studied languages, music, and astronomy and served as a kind of roving, unofficial ambassador. He appears to have favourably impressed everyone he met and was the epitome of the perfect English gentleman of the period — talented, gallant, refined, and courageous.

His relationship with the Queen was, however, mostly an uneasy one and he was never awarded high office, although he served in Parliament and was appointed governor of Flushing in the Low Countries in 1585. He died from wounds received at Zutphen in 1586 and was mourned by the nation.

Most of Sidney's works appeared after his death, The Arcadia, a prose romance regarded by some as the first English novel; Astrophel and Stella, the first series of English sonnets written for Penelope, daughter of the Earl of Essex; and Apologie for Poetrie, a persuasive treatise extolling the value of literature. His influence of English writers was considerable, but was due in part to his posthumous reputation.

Voices at the Window