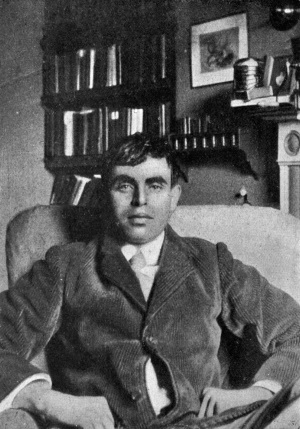 James Elroy Flecker was educated at Dean Close School, Cheltenham, where his father was headmaster, and at Uppingham and Trinity College, Oxford.

After university he joined the Diplomatic Service, spending time in Constantinople and Beirut. In 1913 he went to Switzerland to seek a cure for his tuberculosis but died there two years later at the age of 31.

To a Poet a thousand years hence

The Town without a Market

The Ballad of Camden Town

Invitation to a young but learned friend...

Ballad of the Londoner

The First Sonnet of Bathrolaire

The Second Sonnet of Bathrolaire

The Masque of the Magi

The Ballad of Hampstead Heath

The Translator and the Children

War Song of the Saracens

Hialmar speaks to the Raven

The Ballad of the Student in the South

We that were friends

I rose from dreamless hours

A Miracle of Bethlehem

The Ballad of Zacho

The Ballad of Iskander

Hassan: the Story of Hassan of Bagdag and How He Came to Make the Golden Journey to Samarkand: A Play in Five Acts
James Elroy Flecker