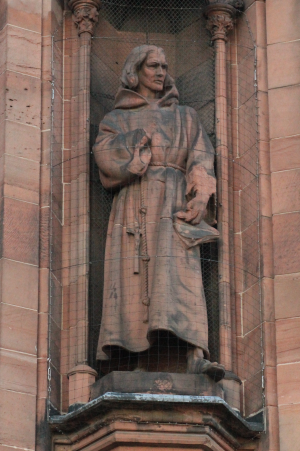 Little is known of William Dunbar’s early life, but he was probably a relative of the Earls of Dunbar and March. He was educated at St Andrews University, from where he obtained a bachelor’s degree in 1477 and an MA two years later. He was ordained as a priest in the Roman Catholic Church of Scotland some time later. In the service of the King of Scotland, James IV, he was a member of diplomatic missions to Denmark and France in the early 1490s. In 1501 and 1502 he accompanied the Bishop of Moray on a visit to England to assist in the conclusion of a peace treaty and negotiations for the marriage of Henry VII’s daughter, Princess Margaret, to James IV, which took place in 1503. He commemorated their marriage in his poem Thrissil and the Rois.

Between 1500 and 1513 he was a court poet, receiving a modest pension, of which there is no record after 1513, the year in which James IV was killed at the Battle of Flodden. Dunbar’s output was extensive in both volume and scope, covering works on religion and morality, courtly pieces and humorous and satirical poems, some quite personal. His religious works include The Ballat of Our Lady, Of the Passion of Christ, Of Deming, and a trilogy of poems Of Discretioun in Asking, Of Discretioun in Geving (Giving) and Of Discretioun in Taking.

The poetry he wrote to entertain the King, Queen, and his fellow courtiers includes A Dance in the Quenis Chalmer, The Dance of the Seven Deadly Sins, and The Flyting of Dunbar and Kennedy, his part in a kind of poetic duel between him and William Kennedy, a fellow court poet who hailed from a different part of Scotland. He also wrote a number of poems of courtly love. His satirical works include The Fenyeit Freir of Tungland and Tydings fra the Session, a criticism of the corruption in the Court of Session. He also wrote several petitions in verse to the King requesting a benefice, an endowed church office that provided a secure income, as well as one asking for a horse and another for a new suit of clothes. One of his best known poems is his Lament for the Makaris, a commemoration of the dead court poets, among whom was Robert Henryson, whose poetry influenced him greatly.

Dunbar’s poems offer vivid descriptions of late medieval society and were written with uncommon frankness and wit in the Middle Scots language of that period. To make them more intelligible, Selected Poems of William Dunbar: An Interlinear Translation, was published in 2010 by Lawrence Siegler. Dunbar enjoyed a high reputation both during his lifetime and after his death, Sir Walter Scott being a great admirer of his work.

In Honour of the City of London

On the Nativity of Christ

Lament for the Makers