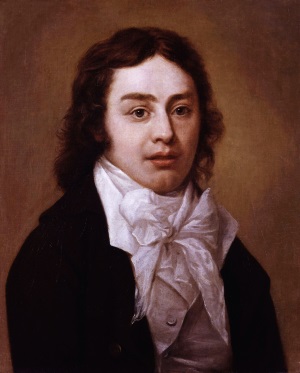 Samuel Taylor Coleridge was born at Ottery St. Mary, Devon where his father was the vicar. He was educated at Christ's Hospital school in London and Jesus College, Cambridge, but left without taking his degree.

Caught up in the revolutionary fervour of the age, he and Robert Southey planned to found a communist colony in New England but this never materialised. He collaborated with Wordsworth on Lyrical Ballads, published in 1798 which contained his most famous poem, The Rime of the Ancient Mariner.

His later life was dogged by relationship problems, depression, and opium addiction but he continued to write poetry, three plays and valuable translations and commentary on the major German philosophers. His greatest poetry was written ealier and contains a sense of mystery. Together with Wordsworth he is regarded as one of the founders of the Romantic movement.

The Rime of the Ancient Mariner

Unruly Times: Wordsworth and Coleridge in Their Time
A. S. Byatt