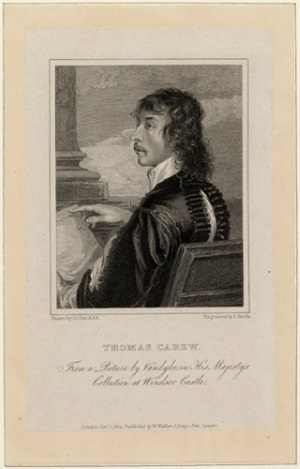 Thomas Carew (pronounced Carey) was educated at Oxford and studied law at the Inner Temple.

He commenced a career as a diplomatic secretary, first to Sir Dudley Carleton (ambassador to Venice and later the Netherlands) and then to Sir Edward Herbert (ambassador to France). He was then appointed to an office at the court of King Charles I, where he was much admired for poetical works.

He modelled his style on Ben Jonson and John Donne and wrote principally love poetry such as The Rapture and some epitaphs. He also wrote a masque, Coelum Britannicum, which was performed for the King and an elegy on Donne.

Persuasions to Joy: a Song

To His Inconstant Mistress

Epitaph: On the Lady Mary Villiers