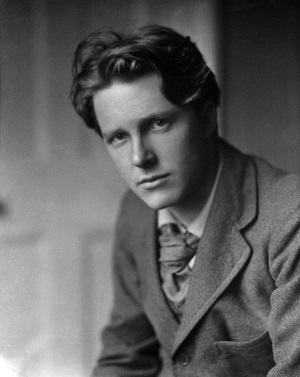 Rupert Brooke was born in Rugby, England and was educated at Rugby School, where his father was a housemaster, and at King's College, Cambridge.

In 1911 he visited Germany and in 1913 travelled in America, Samoa, and Tahiti following his recovery from a nervous breakdown. On the outbreak of war he joined the Royal Naval Division and was sent to Belgium. In 1915 he was transferred to the Dardanelles but became ill en route and died of blood poisoning at Scyros where he is buried.

In many ways a golden boy of his age and a revered symbol of a lost generation, his death was made all the more poignant by its speculative prediction in his famous poem The Soldier, one of his five "war sonnets". Although regarded as one of the three major war poets, he treated a number of other subjects in his tragically shortened career with nostalgia, sensitivity, and simplicity of language.