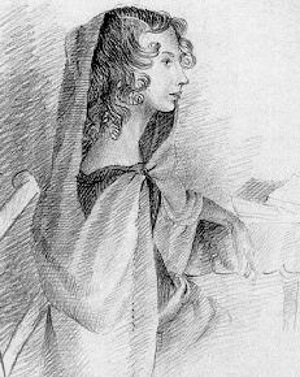 Anne Brontë was born in Thornton, near Bradford, the youngest child of Patrick Brontë, an Anglican clergyman and minor poet of Irish descent, and Maria (née Branwell). The family moved to Haworth later that year when her father was offered the curacy of St Michael and All Angels Church. Her mother died the following year and Anne was brought up by her aunt, Elizabeth Branwell, who moved into the parsonage, with help from her elder surviving sisters, Charlotte and Emily.

Anne was educated at home, her father having lost faith with the Clergy Daughters’ School at Cowan Bridge in Lancashire, whose poor conditions he believed had contributed to the early deaths from tuberculosis of his two eldest daughters, Maria and Elizabeth. Her home studies included music and drawing and she had piano lessons from the Keighly church organist. At the age of 15 she went to Roe Head School in Mirfield, near Dewsbury, where Charlotte was a teacher, attending for two years as a boarder. At the age of 19 she started working as a governess for a family near Mirfield but was dismissed from this position having found it difficult to control the family’s unruly children without support from their parents. Her unhappy experiences there are reflected in her novel Agnes Grey.

On her return to Haworth she became acquainted with William Weightman, her father’s new curate. She was attracted to him, judging from sentiments expressed in some of the poetry she wrote at the time, but her feelings do not appear to have been reciprocated. He was to die of cholera in 1842.

In 1840 she secured a new position as governess to a clergyman’s four children at a country house at Thorp Green near York, where she was to remain for five years. After some teething troubles, she was very happy there and developed close friendships with her charges. It was there that she wrote the poem Lines Composed in a Wood on a Windy Day under the pseudonym Acton Bell. She secured a position for her brother Branwell there in 1843 but this was to end badly when it was discovered that he had embarked on a love affair with his employer’s wife, which resulted in his dismissal and Anne’s resignation.

In 1845 the three Brontë sisters had self-published a joint collection of their poetry, but this did not achieve much commercial success. However, her own most famous novel, The Tenant of Wildfell Hall, was received with great acclaim. Its revelation of debauchery and alcoholism underlying the austere surface of Victorian life caused quite a sensation and, in fact, her sister Charlotte prevented its republication in 1850. Tragedy was to strike the family in 1848 with Anne’s dissolute brother Branwell dying in September and her sister Emily dying a few months later. The following year Anne herself died of tuberculosis during a visit to the seaside town of Scarborough.

Although principally remembered as a novelist, Anne Brontë also wrote a large number of poems, the best known being Dreams, Severed and Gone, The Parting, and The North Wind.

Lines Composed in a Wood on a Windy Day