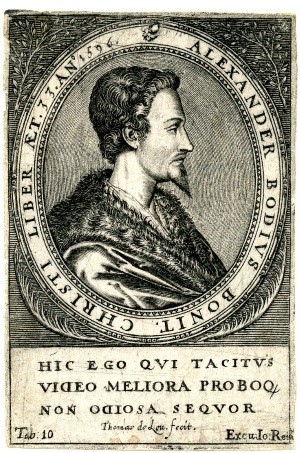 Mark Alexander Boyd (the Alexander was his own grandiose addition) was born in Galloway, Scotland in 1563, the younger son of Robert Boyd and great-grandson of Robert Boyd, Grand Chamberlain of Scotland. He was educated at Glasgow College under the care of his uncle James Boyd, the Archbishop of Glasgow, his father having died when he was a child. He appears to have been a recalcitrant student with a hot-headed nature and it is said he was advised to move abroad to pursue a career as a soldier of fortune. In any event, he went to France at the age of 18 to study Law in Paris under a Latin tutor and later studied Law in Orleans, then Bourges. Having to quit Bourges because of an outbreak of the plague, he moved to Lyons and then Italy.

On his return to France he joined the army of Henry III, fighting on the Catholic side during the French Wars of Religion in spite of being a Protestant himself. After being wounded in the foot he resumed his Law studies in Toulouse but was imprisoned on suspicion of being a spy. However, he escaped to Bordeaux with the help of friends, later spending time in La Rochelle, Spain, and The Netherlands.

In conjunction with this extraordinary itinerant life, this colourful, eccentric character wrote poetry mostly in Latin and Greek and had two collections of Latin poems published in 1590 and 1592. He returned to Scotland in 1595 where he unsuccessfully sought the patronage of James VI with a flattering poem. He died of fever in Ayrshire in 1601. His only known poem written in Scots, the Sonnet of Venus and Cupid, also known as “Fra banc to banc” was rediscovered and published in 1900 by Sir Arthur Quiller-Couch in his Oxford Book of English Verse and championed by Ezra Pound.