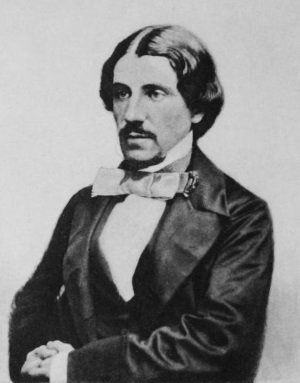 William Allingham was born in Ballyshannon, County Donegal, the son of a bank manager. His mother died when he was nine. He was educated at the Royal Belfast Academical Institution until the age of 14 and on leaving worked in the custom-house of his native town for several years before obtaining a transfer to the Customs office in Lymington, Hampshire in 1863.

He had written poetry from an early age and published his first volume of poems at the age of 26, which included his well-known poem The Fairies. In the succeeding years he published Day and Night Songs (1855) and a narrative poem, Laurence Bloomfield in Ireland, in 1864. In that same year he was awarded a government pension for his services to literature, which was increased when he retired from the Civil Service in 1870.

He then moved to London to work for Frazer’s Magazine, becoming its editor in 1874, a post he held for five years. During his time in England he developed close associations with a number of famous artists and writers, including Thomas Carlyle and Dante Gabriel Rossetti, who illustrated some of his poems.

In 1874 he married the watercolour painter and illustrator, Helen Paterson, who was 24 years his junior, and they had three children. He died in Hampstead in 1889, having published several further volumes of poetry. A hotel in the seaside town of Bundoran, Donegal is named after him. Although he spent the latter part of his life in England, he never forgot his rural Irish roots which his lyrical, emotive and descriptive poetry strongly reflects.

The Abbot of Innisfallen