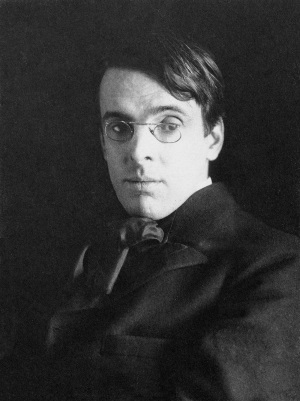 William Butler Yeats was born in Sandymount near Dublin and moved to England with his family in 1867. Educated first at home, he went on to Godolphin School in Hammersmith. The family moved back to Ireland in 1880 and Yeats resumed his education Erasmus Smith School in Dublin where he studied Art for a time. He spent much of his early life in Sligo, his mother’s hometown, which, with its landscape and proximity to the sea, he came to think of as his spiritual home.

In 1887 the family moved back to London where Yeats co-founded The Rhymers’ Club, a group of aspiring poets who met regularly in The Cheshire Cheese pub in Fleet Street.

In 1889 Yeats met Maud Gonne, an ardent Irish nationalist, for whom he developed a lifelong infatuation and who was the inspiration for many of his poems. Having rejected several of his proposals of marriage, she married the Irish nationalist, Major John MacBride, who was later executed for his part in the 1916 Easter Uprising. In 1917, Yeats married a much younger woman, Georgie Hyde-Lees, and they had two children.

In 1923 Yeats was awarded the Nobel Prize for Literature. His poetry drew heavily on Irish folklore and, although often dealing with contemporary events, is characterised by creativity, mysticism and symbolism. He is generally regarded as Ireland’s finest poet.

The Lake Isle of Innisfree

When You Are Old

Where My Books Go

He Wishes for the Cloths of Heaven

The Song of Wandering Aengus

An Irish Airman Foresees His Death

The Fascination of What’s Difficult

Buy books related to W. B. Yeats at amazon.co.uk