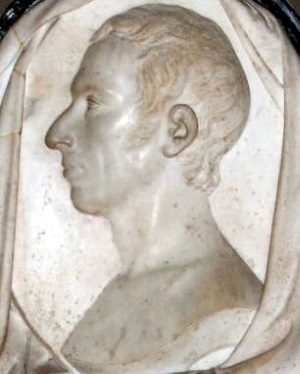 Charles Wolfe was born in Dublin in 1791, the son of Theobald Wolfe, a member of a prominent Irish family. His father died when he was eight years old and the family moved to London two years later. He was tutored by a Dr Evans in Salisbury before going on to Hyde Abbey School in Winchester. The family returned to Ireland in 1808 and Charles entered Trinity College Dublin the following year, graduating in 1814.

He was ordained as a priest in 1817, his first appointment being as curate at Ballyclog in County Tyrone. Soon afterwards he transferred to Donaghmore in the same county. Charles Wolfe is best remembered for his poem The Burial of Sir John Moore at Corunna, an interment that was undertaken clandestinely after he was killed in battle in 1809. This poem was written around 1815 and was published posthumously in 1825 along with fourteen other poems.

After having been rejected in love, he moved for a time to the South of France but returned to Ireland and lived at Queenstown, now known as Cobh, in County Cork where he died aged 31 of consumption. Although primarily known for much anthologised poem on the burial of Sir John Moore, other poems such as To Mary and O, Say Not That My Heart Is Cold are beautifully constructed and convey a quiet sadness and a deep sense of nostalgia. He was a fine poet who was greatly admired by no less a poet than Byron. There is a marble monument to him in St Patrick’s Cathedral, Dublin.

The Burial of Sir John Moore after Corunna