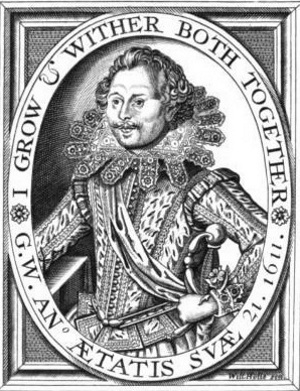 George Wither was born at Bentworth in Hampshire and was educated at Magdalen College, Oxford.

He fought under Cromwell as a major general during the English Civil War and was arrested after the Restoration when the poet, Sir John Denham, interceded on his behalf. Wither had had an earlier taste of prison on two occasions, firstly when he was incarcerated in the Marshalea in Southwark for his satirical writing in Abuses, Stript and Whipt (1613), and later in Newgate for his Wither's Motto (1621).

Less controversial were his pastoral poems in William Browne's The Shepherd's Pipe (1614) and the Shepherd's Hunting (1615). Wither's other major works were Fidelia (1617), Fair Virtue (1622), and Juvenilia (1622), a collection of love and pastoral poetry. His later work The Hymns and Songs of the Church (1641) is written in a more sober vein. He also wrote A Collection of Emblemes (1634/35) in the style of the creator of this genre, the Italian poet Aliciati.

I loved a Lass