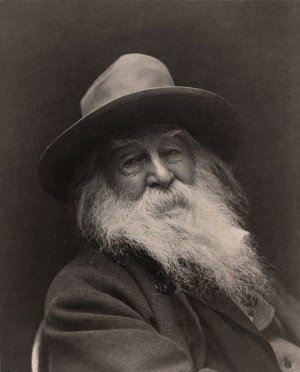 Walt Whitman was born in Long Island, New York, and grew up in Brooklyn. After training as a printer, he returned to Long Island as a teacher and started a local newspaper.

He moved back to Brooklyn in 1842 to continue his journalistic career, simultaneously writing poetry and short stories, working as editor of the Brooklyn Times, and as a correspondent for the New York Times. Whitman also served as a volunteer nurse in army hospitals during the American Civil War, which had a profound effect on him. He was a great admirer of Abraham Lincoln and his best known poem O Captain! My Captain! is one of his tributes to him.

Whitman was one of the first poets to develop a distinctively American style of writing which captures the democratic principle, earthiness, brotherhood, and freedom-seeking spirit of an emerging American culture. In 1873 he suffered a stroke, which left him paralysed for the remainder of his life, during which he continued to write prose and political works.