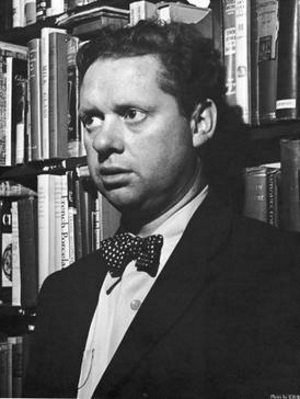 Dylan Thomas was born in Swansea. After leaving grammar school at the age of 16, where his father was a teacher, he worked as a journalist, first in Wales and later in London. He had begun writing poetry whilst at school and continued to do this in his free time after work.

In 1937 he got married and soon afterwards moved with his wife to Laugharne, a fishing village on the River Taf estuary, where he was to spend the last few years of his life. Having given up his journalist job to concentrate on writing poetry, he earned his living by giving reading tours and radio broadcasts, becoming immensely popular on both sides of the Atlantic.

He had suffered from respiratory problems throughout his life and this, combined with his excessive drinking bouts, ultimately led to his death in New York in 1953 at the age of 39 whilst on a poetry reading tour. Although he only wrote in English, his poetry has a musical, Celtic lilt which distinguishes him from any other poet. One of his best-loved poems, Do Not Go Gentle into That Good Night is often read at funerals.

Do Not Go Gentle Into That Good Night

And Death Shall Have No Dominion

In My Craft or Sullen Art

Light Breaks Where No Sun Shines

A Refusal to Mourn the Death, by Fire, of a Child in London

Poem on His Birthday