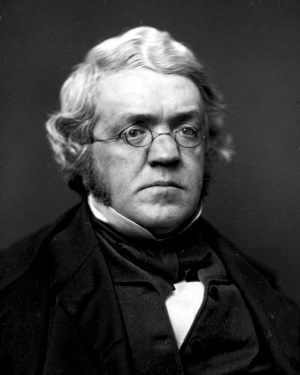 William Makepeace Thackeray was born in Calcutta in 1811 where his father was an official in the British East India Company. After his father’s death when William was five years old, William was sent to England, his mother remaining in India until 1820, having remarried an army officer in 1817 with whom she had in her teens been passionately in love. William was educated at prep schools in Southampton and Chiswick before attending Charterhouse in 1822, which was at that time located in London. He did not have happy memories of his time there and went on to Trinity College, Cambridge in 1828 which he left after two years without taking a degree, although some of his early writing was published in periodicals whilst there.

On leaving university he studied law at the Middle Temple in London for a time but did not persist with this. He then travelled to the continent, spending time in Paris and Weimar, where he visited Goethe. On reaching his majority he inherited £20,000 from his late father, his illegitimate half-sister through his father’s Indian mistress receiving the same amount, but dissipated this fairly quickly through gambling, unsuccessful business ventures, and unsound investments.

In 1936, while studying art in Paris, he met and married an Irish girl, Isabella Gethin Shawe, the daughter of an Indian Army officer. His stepfather bought a newspaper so that he could remain there as a correspondent. After the newspaper failed he moved to London to become a journalist.

William and his wife had three children, all daughters, one of them dying in infancy. Now saddled with family responsibilities, he started to write criticism and book reviews for Fraser’s Magazine, The Times, The Morning Chronicle and the newly created magazine Punch. Sadly, after the birth of their third child his wife started to suffer from depression which deteriorated into serious mental illness necessitating periods in asylums. For the last 30 years of her life, she lived estranged from her husband under the care of a Mrs Bakewell in Camberwell.

Although his Snob Papers had been well received, Thackeray established his fame with Vanity Fair in 1848 and went on to produce several other successful novels including Pendennis, The Newcomers, The History of Henry Esmond and The Virginians. In 1860 he became editor of the Cornhill Magazine, which enjoyed instant but short-lived success. In the last few years of his life his health worsened, partly because of his excessive eating and drinking, and he died suddenly in 1863, aged 52.

Although primarily remembered as a novelist, he produced a large number of poems on a variety of themes which were published in the periodicals of the times.

The Ballad of Bouillabaisse

When the Gloom Is on the Glen