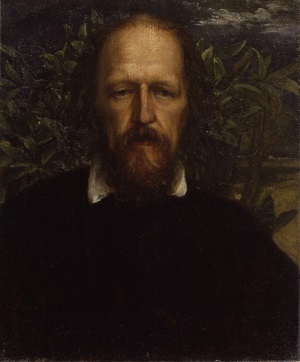 Alfred Tennyson was born in Somersby, Lincolnshire, one of eight children. As well as being educated privately by his father, he was educated at Louth Grammar school, and at Trinity College Cambridge where he won the chancellor's medal for english verse in 1829.

In 1831 his father, who had previously suffered a physical and mental breakdown, died, and Tennyson left Cambridge early without a degree. In 1833, he became engaged to Emily Sellwood, although he did not marry her until 1850. Tennyson is buried in Westminster Abbey. A biography of him by his son was published in 1897.

The Lady of Shalott

The Charge of the Light Brigade