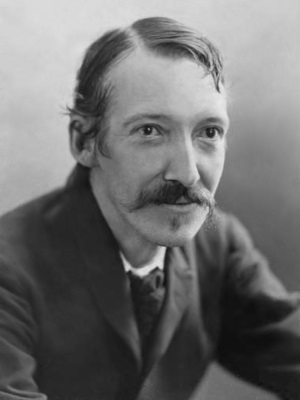 Robert Louis Stevenson was born in Edinburgh where his father was a lighthouse engineer. He was educated at private schools and at Edinburgh Academy before going on to study engineering at Edinburgh University with the original intention of following his father's profession. He gave this up, however, in favour of law and was admitted advocate in 1875 but never practised.

His life was dogged by tuberculosis and he travelled abroad frequently in search of health cures, recording his experiences in books such as Inland Voyage and Travels with Donkey in the Cevennes. In 1880 he married an American woman, Fanny Osborne, for whose young son he reputedly wrote one of his most famous novels, Treasure Island. In 1888 he moved to Samoa where he lived in good health for a time and wrote vigorously in defense of Polynesian culture against European exploitation. He died of a brain haemorrhage in 1894.

Although best known as a novelist and travel writer, Stevenson wrote some powerful and beautiful poetry, collected in A Child's Garden of Verses (1885), Underwoods (1887), Ballads (1890), and Songs of Travel (1896).

Tales from the South Sea: The Beach at Falesa / The Bottle Imp / The Wrecker / The Ebb Tide / The Isle of Voices / Letters (Canongate Classics)
Robert Louis Stevenson, Jenni Calder (Editor)