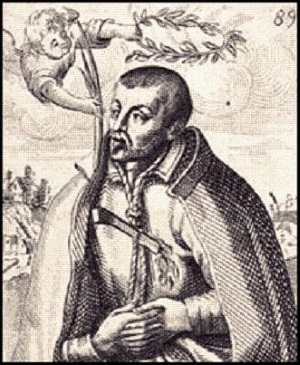 Robert Southwell was born in Horsham St Faith, Norfolk, the youngest son of a well-to-do family. In 1576 he was sent to English College at Douai in northern France, moving on from there to Rome where he was admitted to a noviceship. He transferred from the Roman College to the English College, where, in spite of his youth, he was made prefect of studies. He was awarded a BA and ordained in 1584.

In 1586 he was sent at his own request on a mission to England where he lived disguised as a pastor under the name of Cotton for the next six years under the protection of Anne, Countess of Arundel, a convert to Catholicism, whose husband, Philip Howard, had been imprisoned in the Tower of London and who died there in 1595.

Robert was taking a great risk, as under an Act passed in 1584, any Catholic priest born in England since Queen Elizabeth I’s accession was forbidden to remain in England for more than 40 days in any year. In 1592 he was betrayed and arrested by Richard Topliffe, a tireless agent of the government’s determination to eradicate Catholicism from England. He was tortured and imprisoned in the Tower of London for three years, found guilty of treason and put to death by being hanged, drawn, and quartered. He was canonised by Pope Paul VI in 1970 as one of the Forty Martyrs of England and Wales.

Southwell’s wrote his early poems in Latin whilst in Rome and most of his English works during his time in England. His major prose works were An Epistle of Comfort (1587), Mary Magdalen’s Funeral Tears (1591), The Triumph over Death (1591) and An Humble Supplication (1591). His poetry, which was entirely religious, was published in two volumes, soon after his death. His best known poem, The Burning Babe, presents a vision of unconditional love.