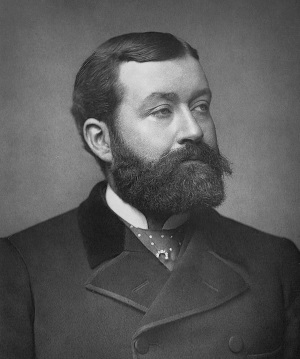 George Robert Sims was an English journalist, poet, playwright, novelist and social reformer. He was born in London, the son of a wealthy merchant and his mother was the President of the Women’s Provident League, later known as the Women’s Trade Union League. He was educated at Hanwell Military College and the University of Bonn. He was married three times, his first two wives dying young.

After a period of time in France, he returned to England to work in his father’s business. This held no attractions for him, however, and he began to write stories and poems, having pieces published in Fun, a Victorian weekly magazine and competitor to Punch. He subsequently became its editor.

In 1877 he began writing poems and travelogues for a new Sunday sports’ and entertainments’ paper, The Referee, under the pseudonym, Dagonet, which were immensely popular. He is best remembered for the ballad known as Christmas Day in the Workhouse, which dramatised the plight of the poor. This, along with other ballads of a similar nature, created a greater awareness of the conditions under which many families were living and was a major factor in the Housing of the Working Classes Act 1885.

George Sims also published a number of plays, novels and detective stories and in 1917 an autobiography, My Life: Sixty Years’ Recollections of Bohemian London. Earlier, in 1905 he had been awarded the Order of St Olaf, first class by the king of Sweden and Norway for his part in a campaign to secure the release of a wrongfully imprisoned Norwegian, which ultimately led to the establishment two years later of the Court of Criminal Appeal. He died in 1922, aged 75.