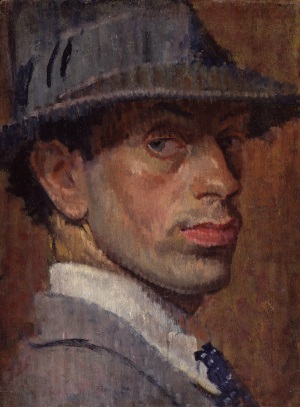 Isaac Rosenberg was born in Bristol, the son of Lithuanian Jewish parents who emigrated to England to escape the anti-Jewish pogroms. They settled in the East End of London where they struggled to make a living. Isaac was educated at the Baker Street Board School in Stepney, where his talent for drawing and writing was encouraged by his headmaster. He left school at 14 to support his parents and was apprenticed to an engraver in Fleet Street.

Whilst there he attended evening classes at Birkbeck College and pursued his interest in painting at the Slade School of Art after being dismissed from his full-time job in 1911, in which he had in any case lost interest. He was supported in this financially by a wealthy female Jewish patron who recognised his potential. He also began to write poetry and published his first collection of poems, Night and Day, at his own expense. He also exhibited his paintings in 1914 at the Whitechapel Gallery.

In that same year he travelled to Capetown to stay with his married sister in the hope that the climate would ease his bronchial problems. However, on hearing of the outbreak of war, recorded in his poem, On Receiving the First the News of the War, he returned to London in 1915, his health much improved, in the hope of finding a job as an artist. He published a second collection of poems, entitled Youth, but unable to find permanent employment, enlisted in the army, much to the dismay of his pacifist parents. He maintains he joined up out of a sense of duty rather than patriotism, as, like his parents, he was a pacifist at heart. He sent half of his army pay to his parents.

Short of stature, he was assigned to the Bantam Battalion of the Suffolk Regiment and after a period of training arrived at the Western Front in mid-1916. Plagued with ill-health during his time in the trenches, after a number of transfers to different regiments, he was killed at the battle of Arras in April 1918.

Isaac Rosenberg’s poetry reflects the tragedy and futility of war and he is justly regarded as one of the finest World War I poets. He is one of the 16 Great War Poets commemorated on a slate stone in Poet’s Corner, Westminster Abbey. He is best known for his war poems which include Louse Hunting, Break of Day in the Trenches, Dead Man’s Dump, Returning, We Hear the Larks, and August 1914.

On Receiving the First News of the War

Break of Day in the Trenches

Returning, We Hear the Larks