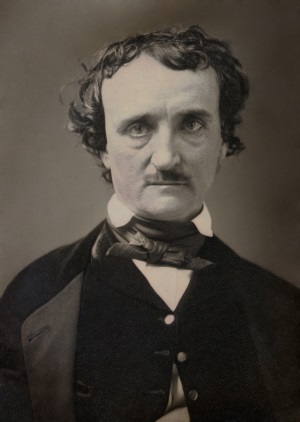 Edgar Allan Poe was born in Boston, Massachusetts and, orphaned whilst still an infant, was raised by the Richmond merchant, John Allan, from whom he later took his middle name. When his adoptive parents moved to England, Poe was educated at Stoke Newington school and subsequently spent a year at the University of Virginia, leaving to pursue a literary career.

He enlisted in the army in 1827 and was admitted to West Point in 1830 but the following year was court-martialled and dismissed for dereliction of duty. In 1836 he married his cousin, Annabel Lee, who died eleven years later. His early poetry was not successful and he turned to journalism, working on newspapers and magazines in Richmond, Philadelphia, and New York.

His greatest success was achieved with his short stories which often have a sinister and macabre flavour and still have a cult following. His most famous poem, The Raven, which is very typical of his work, appeared in 1845.