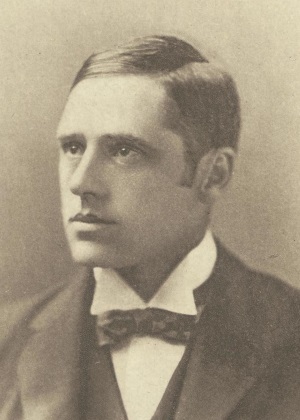 Andrew Barton “Banjo” Paterson was born on a farm in New South Wales, the son of a Scotish immigrant. His mother was related to Australia’s first prime minister, Edmund Barton, which accounts for Banjo’s middle name. After an education at a bush school, he went on to Sydney Grammar School but failed to get into university. Instead he joined a law firm, qualifying as a solicitor in 1886. He started writing poetry during this period under the pseudonym of Banjo, his favourite horse.

In 1899 he became a war correspondent during the Second Boer War and later covered the Boxer Rebellion in China. After a brief period as a newspaper editor, he abandoned journalism to concentrate on writing poetry. During World War I he worked as an ambulance driver and later served in France and Egypt as a commissioned officer, retiring with the rank of major in 1919. After the war on his return to Australia he continued to write poetry and also did some sports journalism. He died in Sydney in 1941.

He is best known as Australia’s bush poet, his major works including The Man from Snowy River, Clancy of the Overflow and the words to Australia’s unofficial national anthem, Waltzing Matilda.

The Man from Snowy River

Clancy of the Overflow

The Road to Old Man’s Town

Under the Shadow of Kiley’s Hill

The Road to Hogan’s Gap

The City of Dreadful Thirst

A Change of Menu

The Man from Ironbark

In Defence of the Bush

The Story of Mongrel Grey

In the Droving Days

There’s Another Blessed Horse Fell Down