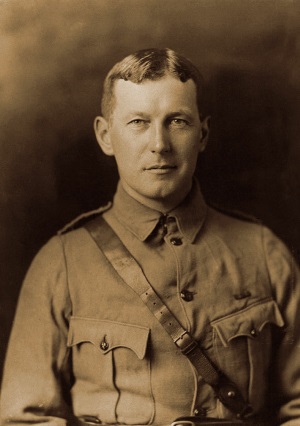 John McCrae was born in Guelph, Ontario, the son of a woollen manufacturer of Scottish descent. He studied medicine at Toronto University and qualified as a doctor in 1898.

He deferred the offer of a fellowship at McGill University to fight in the Boer War, where he served with distinction as a lieutenant in the Royal Canadian Artillery. Returning to Canada in 1901, he worked as a pathologist at a number of Montreal hospitals and as a lecturer at McGill University, co-authoring a medical textbook in 1912.

On the outbreak of the First World War McCrae joined the Canadian Expeditionary Force as a major and brigade surgeon, taking part in the fierce fighting at Ypres in April 1915. Later that year he was asked to take charge of a Canadian field hospital in France, a role he discharged with dedication and distinction under very difficult conditions, but which clearly had a detrimental effect on his health. At the beginning of 1918 he was appointed consulting physician to the British army but before he was able to take up this prestigious post, he died of pneumonia and meningitis.

McCrae's early poems, which were written in his twenties, were published in Canadian magazines and deal mainly with the theme of death. His later poems of which In Flanders Fields is indisputably the most famous, are chiefly on the subject of war or religion. In Flanders Fields became legendary in its own lifetime and was much used, because of its powerful patriotism, for propaganda purposes in support of the war effort. It also ensured that the poppy became the lasting symbol of remembrance.

The Song of the Derelict

The Hope of My Heart

The Harvest of the Sea

The Dying of Pere Pierre

A Song of Comfort

The Shadow of the Cross

In Flanders Fields And Other Poems
John McCrae