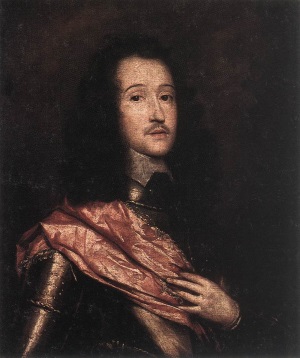 Richard Lovelace was born in Kent, the son of a wealthy aristocrat. After receiving an honorary degree from Oxford he served as a courtier to King Charles I and fought in the Bishops' Wars. Following these he spent a brief spell in prison and after living abroad for a few years was imprisoned again for his support of the King.

During his first imprisonment he wrote To Althea, from Prison which contains the famous lines "Stone walls do not a prison make / Nor iron bars a cage". During his second period of imprisonment he prepared for publication a collection of poems, Lucasta, Epodes, Odes, Sonnets, Songs, etc. dedicated to his fiancée, Lucy Sacheverell, who in fact, believing he had been killed, married another man. Another volume, Lucasta, Posthume Poems, was published after his death.

Richard Lovelace died a poor man, having lost his fortune through his support of the King. His poetry, though not prolific, is sensitive and finely crafted.

To Lucasta, going to the Wars

To Lucasta, going beyond the Seas

To Amarantha, that she would dishevel her Hair

To Althea, from Prison