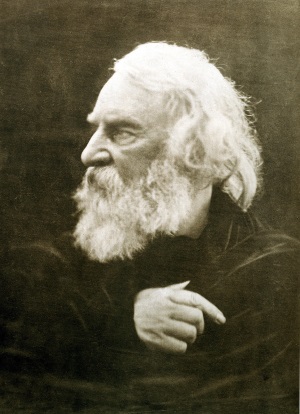 Henry Wadsworth Longfellow was born in Portland, Maine and was educated at private schools and at Bowdoin College to where he later returned to become a professor of languages after spending three years travelling in Europe.

After a second trip to Europe he took up a teaching post at Harvard. He was twice married, his first wife dying at an early age. After his second marriage he lived in Cambridge, Massachusetts, where he produced a large volume of high quality poetic works on a miscellany of themes ranging from homespun situations, historical epics, and American myths.

He is probably best known for The Song of Hiawatha (1855) which captured the spirit of the native noble savage and which contributed to his reputation as America's greatest nineteenth century poet and the first to be commemorated after his death in Westminster Abbey.

The Song of Hiawatha