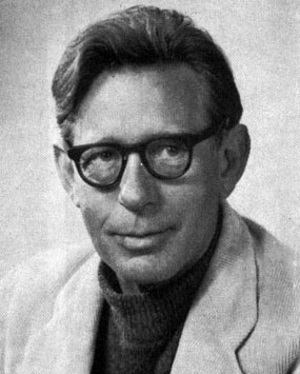 Laurie Lee was born in Stroud, Gloucestershire and grew up in the neighbouring village of Slad. His father served in World War I but did not rejoin his family after the war, remaining in London. Laurie grew up with his mother, his three elder half-sisters from his father’s first marriage, and his elder brother Jack, who subsequently became a celebrated film director.

Laurie was educated at the Central Boys School in Stroud, leaving at age 15 to work for an accounting firm. He later did other casual jobs before deciding to leave home to travel through Spain, mostly on foot, accompanied only by his violin. He returned to England by warship, having been rescued off the Andalusian coast following the outbreak of the Spanish Civil War. Believing in the Republican cause, he joined the International Brigade in 1937 as a volunteer but whether he was involved in action at all, as he later claimed, is doubtful.

On his return to England he had an affair with a married woman, Lorna Wishart, who subsequently left him for the artist, Lucian Freud. During World War II he worked for the Ministry of Information making documentary films and also did freelance work as a journalist and script writer. In 1950 he married Catherine Francesca Polge and they had a daughter Jessie, who still lives at the house he bought in the 1960’s in Slad.

Laurie Lee wrote three autobiographical novels, Cider with Rosie (1959), As I Walked Out One Midsummer Morning (1969) and A Moment of War (1991). Although better known for this biographical trilogy, he had started to write poetry in the 1930’s and had several volumes published throughout his lifetime as well as travel books and short stories. He died in 1997 at the age of 82, his best known work, Cider with Rosie, being made into a film the following year.

Day of These Days

The Long War for Peace Day