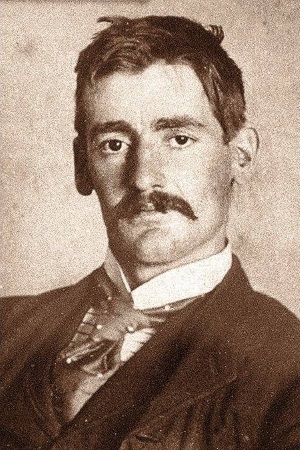 Henry Lawson was born in Grenfell, New South Wales, the eldest son of Norwegian seaman who jumped ship to take part in the Australian gold rush. His mother edited a women’s paper, The Dawn, wrote her own poetry and helped to publish her son’s. Lawson’s education was erratic on account of his parent’s frequent moving around and he suffered from deafness which affected his academic progress but he was interested in literature.

On leaving school at the age of 14 he worked for a time with his father in the building trade but in 1883 moved at his mother’s request to Sydney as an apprentice coachbuilder whilst studying at night school. He started to write stories and poems and his first collection of short stories, While the Billy Boils, was published in 1886 and his first poem, A Song of the Republic, appeared in 1887. By his mid-twenties he established some reputation as a writer and in 1891 he was offered a position with The Boomerang but this was short-lived as the paper went under the following year.

In 1896 he married Bertha Bredt and they had three children. The marriage was unhappy, however, and ended in separation 1n 1903 on the grounds of Henry’s violent and drunken behaviour. Thereafter his later years were increasingly unhappy as he descended into depression and alcoholism. Between 1905 and 1909 he spent several periods in Darlinghurst Gaol in Sydney for drunkenness and non-payment of child support. He was sustained during this period through the friendship of Mrs Isabel Byers, in whose house he had a room. Separated from her husband and a poet herself, she recognised his genius, assisted him financially and endeavoured to arrange publishing deals for him. It was at her home that he died in 1922.

Lawson’s poems reflects the harsh realities of life in the bush, of which he had much experience, and are written vividly and with pathos. His output was prolific and he is regarded by many as Australia’s most famous writer. In spite of all his personal problems, he had become a legend in his own lifetime and was given a state funeral, a unique honour for an ordinary citizen. A statue of him in a Sydney park was unveiled in 1931.

The Star of Australasia

Scots of the Riverina

A Song of the Republic

Andy’s Gone with the Cattle

The Shakedown on the Floor

The Light on the Wreck