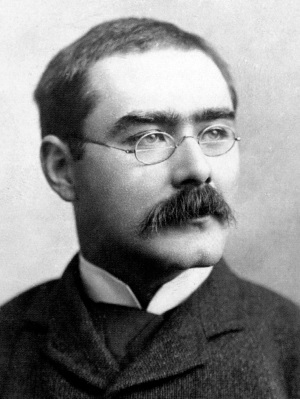 Rudyard Kipling was born in Bombay (now Mumbai). His father was a sculptor and pottery designer, and principal of a prominent art school there. His mother Alice was a writer and poet, and they named their son after the lake in Staffordshire where she and her husband first met. He was sent to England with his younger sister Alice at the age of five to board with an English couple in Southsea, Portsmouth where he appears to have been very unhappy and badly treated. He maintains this is where he learnt to lie to avoid censure, to which he later attributed some of his literary imagination.

In 1878 he attended the United Services College in Devon in preparation for a military career and after this moved to Lahore (then part of India) to become the assistant editor of a local newspaper, the Civil and Military Gazette, a job arranged by his father. He got married in London in 1892 and he and his wife lived in Vermont for a few years before moving back to England, first to Torquay and then Rottingdean and Burwash in East Sussex until his death in 1916. The couple had three children, two daughters and a son; their daughter Caroline died of pneumonia aged five and their son John was killed in action at the Battle of Loos in World War I, something he had difficulty coming to terms with.

Kipling’s writings consist of short tales and sketches, novels and poems, many of which are influenced by his experiences of India. Between 1886 and 1919 he published several volumes of verse and in 1907 was awarded the Nobel Prize for Literature, the first Englishman to receive this honour. His most famous poems are generally considered to be If—, The Ballad of East and West, Gunga Din, and The White Man’s Burden. During his lifetime in the days of Empire, Kipling’s poetry reflected Britain’s power in the world but in recent, more politically correct times some of his poetry is regarded as racist and jingoistic. What is beyond dispute, however, is that he was a fine wordsmith with a great descriptive ability.

The Ballad of East and West

The Ballad of Fisher’s Boarding-House

The Gods of the Copybook Headings

The Glory of the Garden

Harp Song of the Dane Women