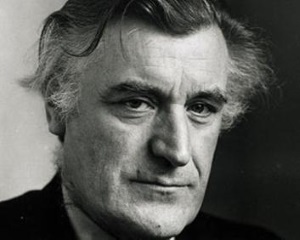 Ted Hughes was born in Mytholmroyd in the West Riding of Yorkshire, the son of a joiner of Irish descent. After his family moved to Mexborough, where his parents ran a shop, he was educated at Mexborough Grammar School. There, he was encouraged to write by his teacher and also at home by his mother and elder sister, Olwyn. He was fond of exploring the rural South Yorkshire countryside and his early poems The Thought Fox and The Rain Horse reflect this.

In 1949 he won a scholarship to Pembroke College, Cambridge, but deferred his entry to 1951 to fulfil his national service obligation. He initially studied English at Cambridge but switched to Archaeology and Anthropology in his final year. After university he had a variety of casual jobs.

In 1956 he met Sylvia Plath, an American poet who was studying at Cambridge. They fell in love and got married a few months later. Hughes entered his first collection of poems in a competition in 1957, winning first prize and a Somerset Maugham Award. The couple then moved to the United States, where Plath took up a teaching position at Smith College in Northampton, Massachusetts, while he taught at the University of Massachusetts in Amherst. On their return to England they had two children and bought a house in Devon, where he continued to write poetry, essays, and reviews. The couple separated in 1962 after Hughes had an affair with Assia Wevill, a refugee from Nazi Germany and an aspiring poet.

Plath committed suicide in early 1963, an event for which many blamed Hughes. He was clearly devastated by her death and in an attempt to put the record straight wrote an 88-poem account of his relationship with her, Birthday Letters, which was published in the last year of his life to great acclaim.

Ted Hughes also wrote prose, including books such as The Iron Man (1968), critical works and adaptations and translations such as Crow (1970) and Tales from Ovid (1997), which won the Whitbread Book of the Year award, and Shakespeare and the Goddess of Complete Being (1992).

In 1984 he succeeded John Betcheman as Poet Laureate. Fourteen years earlier he had married Carol Orchard and they remained together until his death in 1998. He had been awarded The Order of Merit shortly before this.

The Child is Father to the Man